Perovskite solar cells are a new technology with great commercial appeal. You can print them on film and they promise to be cheaper than the silicon-based solar cells that have dominated the market for decades.

Now, an international team of scientists in Russia and Italy has developed a way to increase the efficiency of power conversion of these solar cells. 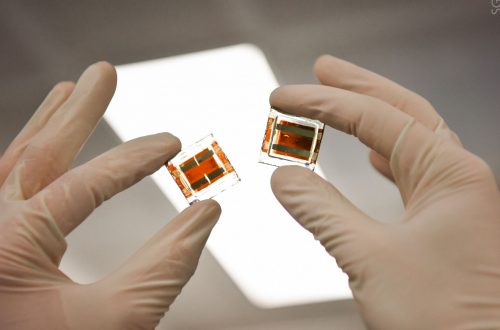 Scientists are working on improving the stability and efficiency of perovskite solar cells.
Image: MISIS.

In a recently updated Nature Materials paper, they explain how they did this by introducing 2D titanium carbide compounds known as MXenes.

“We discover that MXenes, owing to their unique two-dimensional structure, can be used to tune surface properties of perovskite permitting a new optimization strategy for this [third]-generation solar cell,” says senior study author A. Di Carlo, a professor of optoelectronics and nanoelectronics at the University of Rome Tor Vergata in Italy.

Di Carlo and his colleagues discovered that doping perovskite solar cells with tiny amounts of MXene can increase the new technology’s power conversion by more than 20%.

Many organizations around the world are actively developing solar cells that use perovskite.

A June 2019 Nature news article listed more than a dozen firms that are involved in commercializing the new generation of solar cells.

Among the many advantages of perovskite is its long lifetime and superior ability to absorb light and conduct electrical charge. The material also promises to be cheap to manufacture.

In addition, because you can produce them on thin flexible plastic, building constructors can integrate the new solar cells as thin films on walls or glass.

Need to improve efficiency and stability

Perovskite solar cells are already approaching the efficiency of the market-dominant silicon ones. The team behind the new study notes that the record for perovskite currently stands at 25.2% compared with silicon’s 26.7%.

However, concerns about stability remain, mainly due to factors that make the material degrade internally.

A perovskite solar cell has several layers of different materials. These include the active perovskite layer in which sunlight converts into electricity, plus layers in which the charge collects at electrodes.

To increase efficiency of conversion from sunlight, electrical charge has to move between layers with as little loss as possible. Incorporating MXenes into the cells appears to reduce this loss.

In a series of experiments in which they doped the solar cells with microscopic quantities of MXene, the team managed to increase device efficiencies by more than 25% compared with earlier, MXene-lacking laboratory prototypes.

The researchers found that the most efficient configuration was one that has MXenes within layers and at their interfaces.

They believe that an important feature of their study is that it explains the physical and chemical effects of adding MXenes to perovskite solar cells.

“The main result of this work,” says study author Anna Pasniak, from the National University of Science and Technology (MISIS) in Moscow, Russia, “is identification of changes in the electrical properties of semiconductors, caused by introduction of MXenes.”

“Hence, this new nanomaterial possesses great potential for the use in large scale production,” she concludes.

The team is continuing to work on making the perovskite solar cells even more efficient and stable.