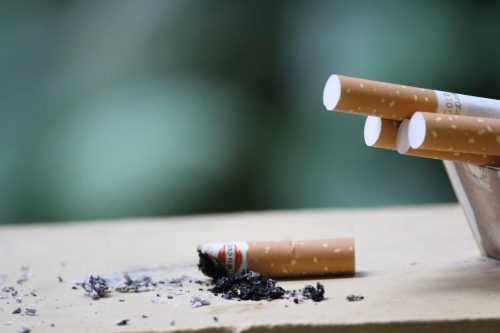 Tobacco has been around since ancient times, but it was not until the 19th century that cigarette smoking as we know it became popular in the United States. Before this, people would smoke tobacco in cigars and pipes. Initially, tobacco was marketed as a safe product and even praised for its health benefits, such as:

Cigarettes eventually proved to be extremely harmful for our health. A series of medical reports from the 1950s and the 1960s first mentioned a causal relationship between smoking tobacco and pulmonary diseases such as lung cancer. Today, over 34 million people throughout the country smoke, whereas 16 million struggle with diseases caused by their detrimental habit.

The Connection Between Smoking and Lung Cancer

Published on May 27, 1950, the Wynder and Graham Study was the first piece of medical literature to find a connection between tobacco smoking and lung cancer. One of the most interesting findings of this study is that over 96% of the men who were suffering from lung cancer were smokers. In the study, lung cancer is referred to as bronchogenic carcinoma, which is a relatively outdated term nowadays in medicine.

Because tobacco smoke contains more than 7,000 chemicals, out of which 250 are toxic to our health, it should come as no surprise that it can easily cause lung cancer over the years. According to estimates, people who smoke are 15 to 30 times more likely to develop lung cancer. Nevertheless, this period can vary depending on factors such as the number of cigarettes they smoke a day, the potency of the tobacco, and whether they have a genetic predisposition to lung cancer.

Between 10% and 15% of smokers come to struggle with lung cancer every year in the United States. According to the American Cancer Society, over 235,000 new cases of lung cancer will have been diagnosed by the end of 2021. Furthermore, more than 131,000 people will have lost their lives to the disease by the end of the year, which is also the average number of individuals who die of lung cancer caused by smoking annually.

The average age of diagnosis for lung cancer is 70. It is worthy of note that lung cancer is the leading cause of cancer death in the country, as well as in the entire world. Up to 90% of lung cancer cases are the result of tobacco smoking. Sadly, this unhealthy habit is the leading cause of preventable death worldwide. If the pattern of smoking continues at the same pace, over 8 million people will die every year throughout the world of related diseases by 2030.

What Other Diseases Is Tobacco Smoking Responsible For?

Due to the astounding number of toxic chemicals it contains, tobacco smoke can lead to the development of diseases in nearly any part of the body. Every time a person smokes, they inhale 250 harmful substances, out of which 69 are known carcinogens, which means that regular exposure to these chemicals may cause a malignant disease, the most common being lung cancer. However, there are other diseases and conditions smoking tobacco can result in, such as:

It is important to keep in mind that this is only a shortlist of the overwhelming number of diseases tobacco smoking is associated with. If you are a smoker, please take a moment to think about how many toxic chemicals you are putting in your body every time you take a drag from a cigarette. However, because nicotine is highly addictive, we also understand why so many smokers have a difficult time quitting. Fortunately, there are many resources providing support to smokers who want to quit, such as individual or group therapy, counseling, and nicotine replacement therapy.

Is Secondhand Smoke Exposure as Dangerous as Tobacco Smoking?

On the bright side, a smaller number of people had measurable levels of cotinine, a compound found in nicotine, in their blood over recent years. This is probably due to the increasing number of states and communities with laws that prohibit smoking indoors, also since using tobacco around nonsmokers has become less and less socially acceptable.

Miguel Leyva and the team of experts at Atraxia Law have over 35 years of experience in evaluating product liability claims and assisting people who struggle with tobacco smoking-related diseases recover damages.